Anyways, the protocol has evolved extensively over the years, and the SMB we use today in Windows sharing (i.e.: where you browse to \\server\share or search your network for file sharing servers via the GUI) is very different to earlier versions of the protocol.

The biggest difference today is that "SMB1" is considered utterly broken and A BIG SECURITY RISK. I emphasise this because the instructions below are potentially dangerous, and like all retro computing you should be taking care to isolate network connectivity to old computers, as they are likely vulnerable to all sorts of Internet nasties, and could infect your other systems if you are not careful.

So, with the safety warning out of the way, SMB1 is deprecated by most new systems - it won't work on recent builds of Windows 10, macOS, ZFS, or a variety of cheap vendor NAS solutions like QNAP, Synology, etc. But this can be tricky if you've got an old system you want to share files with. For example, a Windows 98SE machine, or something like OpenPS2Loader running on a PlayStation 2 with ISO loading over SMB1.

Thankfully, "Samba" exists. It's an open source SMB server, and allows you to choose legacy protocols if you wish (understanding that these are risky, so they're disabled by default, but you can always re-enable them).

I won't go into the basics of installing Linux here - I'll leave that to the reader. But what I'm doing here will work in a VM (that's how I've done it to demonstrate), as well as devices like a Raspberry Pi. Linux install guides are everywhere. But this assumes you've got a default Linux install somewhere, and can log in and get root/sudo (admin) access.

I'm building this on Ubuntu 20.04 LTS. But you can use any distro you like. I'll try to point out where commands might differ.

So first up, here's my Win98SE VM. Lives inside VirtualBox, and has the standard IP stack installed, with an IP address handed to it by DHCP. When attempting to reach my file server on \\192.168.3.254 , the machine fails, as the file server will only respond to SMB2 or higher protocol requests: 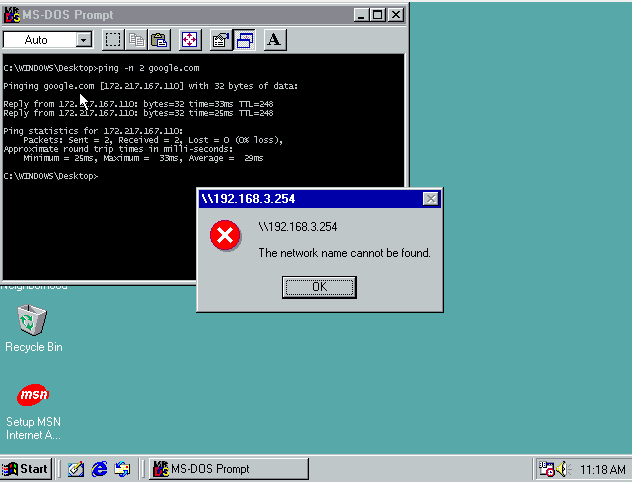 So, I've done a default install of Ubuntu 20.04 LTS in a VM. From there, I install two packages - "cifs-utils" which lets me mount a modern SMB2+ share, and "samba" which is the server that will allow me to re-share that mount with an older system.

So as root I run:

If you're using something like CentOS, you'd need to "yum install" these instead. But that's out of scope for this guide. "apt-get" works on Ubuntu, Mint, Debian and Raspbian distros.

Once installed, I create a directory for my gateway to mount my actual server. I have a particular share set up there named "os". It's read-only, has no auth on it, and has all my OS drivers, service packs and whatnot in it.

I create a directory to mount it into, and mount it up (note the slashes are opposite to Windows notation):

You can pass options to the "mount.cifs" command to send usernames and passwords across if you like. Something like:

I'll let the reader experiment with that. However, I can verify the mount is working:

Great, all the folders from my server that I'd expect, mount on my gateway box.

Now, let's re-export them via an older Samba protocol.

First, edit /etc/samba/smb.conf on the gateway box, and add in under the section titled "[global]" the config:

From the Samba man page, the protocols on offer are:

So we're going waaaay back in time to the very first one ever as our minimum accepted. Samba-Server will adjust to whatever a client asks for (so if it asks for more/newer, it'll get it). But all we're doing here is setting the oldest method it will allow. Again, a reminder that this is terribly insecure, so apply usual retro computing cautions.

Now, at the very bottom of the /etc/samba/smb.conf file, we add in the following share defintion:

You can call it anything you like. I've called mine "remap" here. It's set to no password needed with the "guest ok" command, and read-only. I'll leave read/write options to the reader to play with.

Verify it's running with "systemctl status smbd" if you like.

Back on the Windows98 box, let's hit the IP of this new server we created: 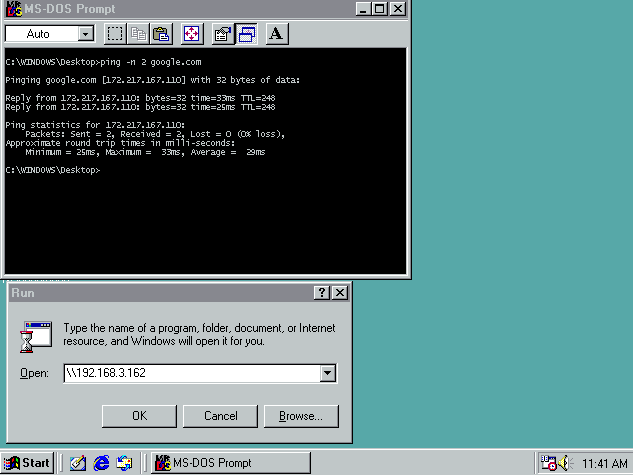 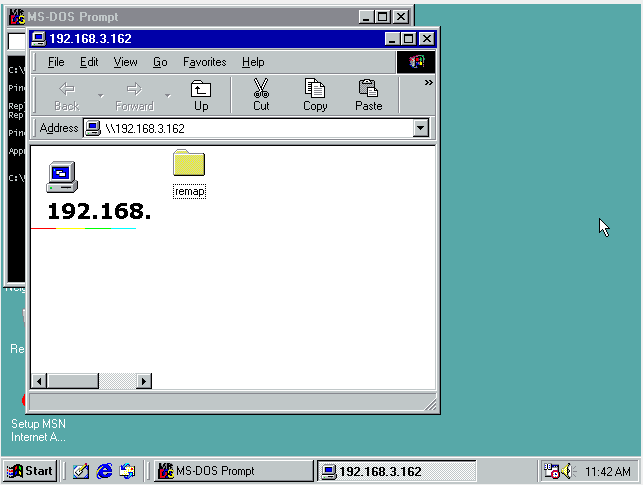 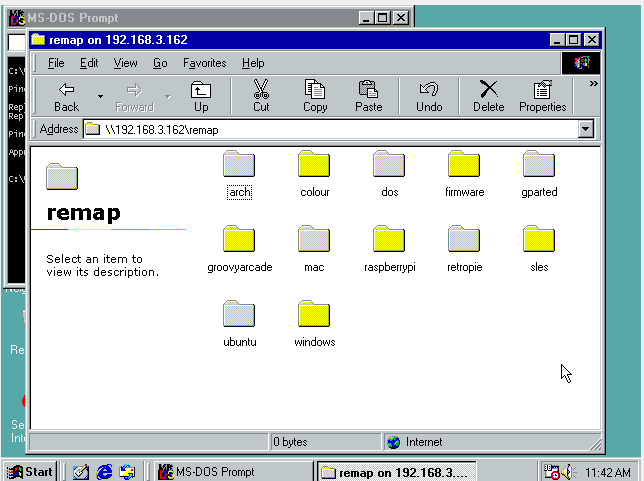 We're off and running!

For extra fun, you can check the status on the Linux box of who's connecting in using what protocols. I can see my Win98 box using the "NT1" version of the protocol:

And again on my actual Linux server/NAS, where we can see the gateway connecting using a much more modern SMB version 3.11 protocol (the latest version that ships with both Samba and Windows 10 / Server 2016 / Server 2019):

So that's the SUPER basics version. From here all sorts of options for you to try (and if people have questions, I can demo more stuff).